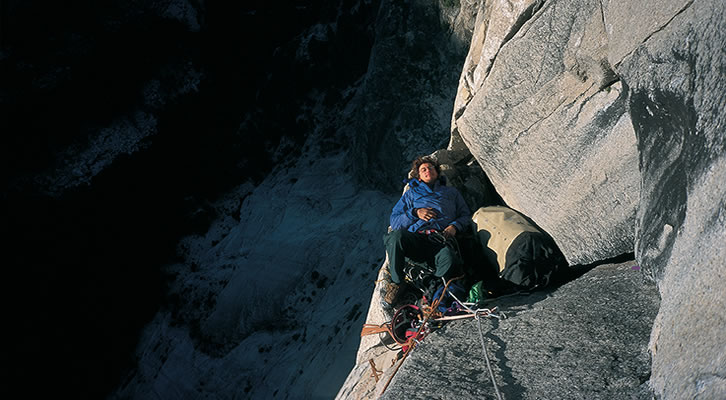 When crux launched in 2002, its very first range of four rucksacks included two with almost the same name: the A50 and the AK50. Identical in their old-school retro design, the “A” stood for Alpine, and 50 for the number of liters (cubic inches just don’t have the same ring to them). Both packs were distinguished by their apparent lack of features, and ran counter to the blingfest found on other products at the time. So why did only one – the AK50 – truly catch on?

The answer is in the name. The K is for Kevlar. It happened like this: having already finalized the A50 – which was made from a lightweight Dynatec® fabric (a pseudo-technical looking, but otherwise conventional fabric) – we discovered a Kevlar fabric made by Schoeller. Although strictly speaking developed for protective panels on motorcycle clothing, we liked its very high tear strength (relative to its weight) and its tight, solid looking weave. And it oozed a certain, indefinable quality that still defies description even today. So, despite this fabulous new fabric being ridiculously expensive, we decided to make a Kevlar version of the A50. The AK50 was born.

After a few months it was evident that people preferred the AK50, despite its substantially higher price tag. The disparity in sales was such that, after exhausting the first A50 production run, we never made any more. The AK50 ran for a couple of years before morphing into the AK47. Why?

One of the most consistent pieces of feedback we received about the AK50 was that customers wanted a fixed-lid model. So we combined re-engineering the pack (to incorporate a new moulded back panel) with the switch to a fixed lid. This reduced the internal volume of the pack by a couple of litres, and because it was important not to mislead customers, we revised the name. Sticking to the fairly standard, if unimaginative style of backpack nomenclature, we decided “AK47” had a certain ring to it. The rest is history.

Well, not quite. Of course, once the AK47 came out with the fixed lid design, the feedback became “great pack, but can you make it with a floating lid?” Arghhh! Hence the AK47-X: the X denoting the extendible lid and extra capacity.